To Love a Traitor 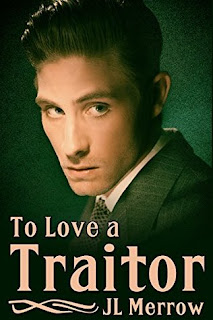 I have a fondness for books set in and around World War I and J.L. Merrow's "To Love a Traitor" is set right after the war (1920) at a time when nations are rebuilding and mourning the loss of a generation of young men who died in the trenches.

George Johnson (actually Roger Cottingham) goes undercover to learn if Matthew Connaught is the traitor who caused his brother Hugh's death in the war. George/Roger was a conchie - conscientous objector - who spent a year in prison - and he and Hugh's fiance Mabel feel that someone betrayed Hugh and his men as they ventured out into No Man's Land on a secret operation and were shot and killed.

Matthew Connaught is their prime lead, so George moves into the boardhouse where Matthew lives in order to suss out any information. Matthew is completely adorable, a kind gentle man who copes admireably with the loss of his lower right arm. Before too long, the two men are dipping their toes into the start of a relationship, while the mystery continues to slowly unfold around them.

Matthew invites George home for Christmas and we meet his equally adorable family and JL Merrow does a wonderful job of showing us their close and loving bonds. There's a depth to the characters (even the tertiary characters) and as we get to know Matty and George better (and particularly George's feelings about being a conchie), their growing love is beautifully told.

The solution to Hugh's death is eventually revealed, with a particularly heartbreaking final discovery, and Matthew and George are on their way to a lovely HEA. A very satisfying read with great characters. 4 stars.