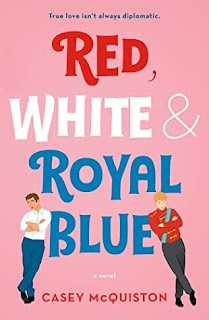 
This book is simply wonderful. Set in a slightly alternate universe Ellen Claremont, a divorced democrat from Texas, wins the presidency in 2016 and bring her two kids Alex and June Claremont-Diaz to the White House, and they make up, with the addition of the VP's granddaughter Nora Holleran, the wild and raucous White House Trio.

As the book starts, I almost, almost DNFed it because Alex is kind of a jerk. Yeah, he's brash and irritating, and just won't shut up .... but once the books get more fully into the swing of "accidentally falling in love with your sworn enemy at the absolute worst possible time," it just gets better and better every page.

The book takes off like a glittery rocket when we meet Prince Henry of England -- the "spare" to his older brother Philip who is perfectly bland and flavorless and totally in line with all the Crown's dictates and obligations. As the author says "Philip looks like a stock photo." When archnemesis Henry and Alex end up arguing at Philip and Martha's very royal wedding - and Alex knocks over their $75,000 wedding cake - their respective PR departments decide that a friendship needs to be manufactured.

Their fake friendship ever so slowly moves from a charity event at a hospital to sporadic witty texts. Alex asks Henry after seeing a photo of him on an Australian beach in swim trucks: you have a lot of moles. is that a result of the inbreeding? And Henry: In world's most boring meeting with Philip. Don't let the papers print lies about me after I've garroted myself with my tie.

From there, it proceeds to phone conversations and texts that grow more intimate and personal, and after a very memorable kiss in the Rose Garden, Alex learns that Henry, indeed, is "very, very gay." Alex struggles with his sexuality, finally realizing that he is bisexual, and very, very interested in Prince Henry.

As the two young men try to conceal their romance from the media, and contrive ways to see each other, their communication becomes incredibly rich and poignant as they exchange excerpts from famous lovers' letters and we grow to know and love each character. The author does an absolutely wonderful job in giving us Henry, who "realized by the time he was four that every person in the country knew his name." Alex can't bear to think of "All those nights Henry can't sleep, just knocking around these endless, impersonal rooms, like a bird trapped in a museum." The gentle unfolding of Henry's personality is so nuanced and tender.

To round out the plot, we get a heavy dose of politics and political dirty tricks plus a glorious comeuppance to the Queen and the exceedingly officious Philip, a high-powered Election Night and then a HFN that just feels right.

The author does such a fantastic job with the characters throughout the book - the secondary and even the tertiary characters - and uses social media (texts, email, news reports) to great advantage. 5 stars and I can't recomend this book enough!