The Man From Milwaukee 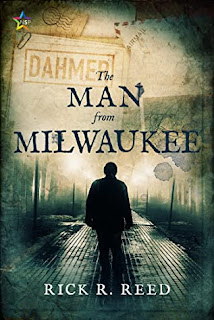 Title:  The Man From Milwaukee

Back in the summer of 1991, I was on a weeklong sailing trip around the Apostle Islands in Lake Superior and upon docking, we learned of Jeffrey Dahmer.  Getting every gruesome detail in one fell swoop has always made this case feel overwhelmingly horrific and incomprehensible to me.

The Man From Milwaukee is set in Chicago in 1991 and Emory Hughes is fascinated by the grainy newspaper picture of tired, seemingly timid Jeffrey Dahmer. Shy, virginal Emory lives with his mother and sister, cares for his beloved mother in the final stages of AIDS, works a dead-end job, and can't reconcile the goth angsty distant Mary Helen with the little girl he helped raise and dearly loves.  Dahmer is just one more mystery he can't fathom.

Emory wonders "how could he [Dahmer] have done it? What must have driven him? Why would he want to do such horrible things?" And as the story develops, Reed shows us that maybe the true horror is we all have these horrible things inside and the rationale we tell ourselves for why we do them is not so unreasonable.  As a deeply conflicted gay man, Emory sees in Dahmer "a young man like myself, confused and full of pain because he can't help being who he is." Emory sees Dahmer's terror ("he was sure that the terror was born of feeling out of control") and he understands it.  Dahmer and his desire for someone to stay with him, love him and never leave strikes an equally deep chord within Emory.

Tyler is a new graduate with an English degree whose "life revolved around a stupid, dead-end job that he was too good for, getting drunk on the weekends and having sex with strangers. It was what twentysomething gay boys did in the 1990s."  Emory is definitely not his type, yet he draws Tyler like a moth to a flame. There's a sweetness to their blossoming relationship that is undercut with horror, and I found myself torn between eagerly turning the page and not wanting to know what was going to happen.

Emory and Tyler are wonderfully crafted and the secondary characters such as Mary Helen and her wife and Cole are richly developed. Reed is a master storyteller and he draws us in bit by bit into the horror of Emory's madness and then leave us off-kilter wondering if Emory's acts are reality or imaginary. Tyler sees a glimpse of .... something very unsettling in Emory ... and yet wonders if Emory can be forgiven.

This is not an easy book to read, and since the Dahmer story is one that I personally find incomprehensible and so disturbing, it would have been easy to set this one aside and not finish it. But having come out the other side, I have to say this book is absolutely masterful, deeply disturbing, and eventually illuminating and uplifting.  I highly recommend it.  5+ stars.