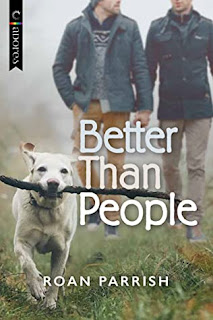 
This is a charming story of two men who find each other and bond over the love of animals, plus there's plenty of well-detailed steamy sex.

Jack Matheson, who creates whimiscal illustrations for children's books, is burrowing in after a problematic parting of the ways with his co-author. He's hurt and gathers comfort from his tribe of cats and dogs named Pickle, Mayonaise, Bernard (yes, he's a St. Bernard), etc. When he breaks his leg, he advertisers for a pet walker and Simon answers the ad. Simon is shy ..


It was a word people had used to describe Simon Burke since he was a child. A tiny, retiring word that was itself little more than a whisper. But what Simon felt was not a whisper. It was a freight train bearing down on him [...] it was a swimming head and a pounding heart. A furious heat and a numbness in his fingers. [...] Shy was a word for a child's fear, shed like a light spring jacket when summer came. What Simon had was knitted to his very bones, spliced in his blood, so cleverely prehensile that it clung to every beat of his physical being.

Jack's little menagerie is lovingly created and personalized and Roan Parrish does a wondrous job of developing and deepening Simon's character.  I love how Simon and Jack navigate their way into a relationship that is equal parts heat and heart.

However, I would have loved to have had deeper development of Jack's character; while Simon's shyness is well documented and explained, Jack remains somewhat of a mystery.  His insecurities about his talent as well as his unwillingness to move past his betrayal by his literary partner seem unfounded given that we don't have as strong an understanding of his personality.  While this doesn't derail the story, it just didn't work for me.

But the ending, which realistically creates a HEA for Jack and Simon without ignoring his continuing issues, is well done and I'm giving "Better Than People" 4 stars.