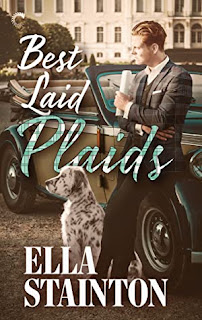 In her debut novel, set in post WWI England, Ella Stainton introduces us to two academicians, Ainsley and Joachim, who are different in nearly every way, yet are perfect for one another.

Joachim is a no nonsense middle class Englishman with a wry sense of humor and an imposing physique, but a rather tender heart. He still carries physical and emotional scars from his service in WWI. Joachim is working toward a doctorate in psychology, while resigning himself to the fact he will need to be careful and hid his queerness for the rest of his life once he achieves his goal.  Joachim's final doctoral thesis is on "the manifestation of delusions in those otherwise accounted as sane."

Enter one brilliant, insanely gorgeous, gay Scotsman Ainsley Graham with what appears to be ADD, heir to a large estate and a scholar who "had annihilated his reputation as one of the Empire's most learned folklorists by publicly insisting that he chatted with ghosts.  On a daily basis."  He is also an exquisite ginger with a fondness for wearing plaid, and is "simply the most magnificent creature Joachim had ever encountered in his life."

Ainsley gives Joachim a driving tour of paranormal locations,  and in between ghostbusting, Ainsley and Joachim indulge in deliciously explicit sex with more than a touch of dominance on Joachim's part.  Ainsley simply does not do cuddling ... or emotion ... or relationships and feelings make his stomach ache and skin itch. So Joachim figures he needs to stay in charge so he can walk away unscathed since both men agree this is just a few nights of exquisite passion and nothing more.

So many things work so well in this story, and Stainton balances this incredibly sexual relationship and the feelings each man is trying to tamp down, and blends in with the paranormal explorations. Ainsley truly does talk to ghosts ..... but Joachim is able to also see them and some of the encounters with Ainsley's family members are so touching.

She also touches on the aftermath of WWI  and grieving for all the young men who died in that war "with some notion that their sacrifice might mean something, not realizing it didn't when all was said and done."


Ella Stainton has hit it out of the ball park on this debut book, and I love her unique voice and solid writing talent. 5 stars.