A Friend in the Dark (Auden & O'Callaghan Mystery Series #1) 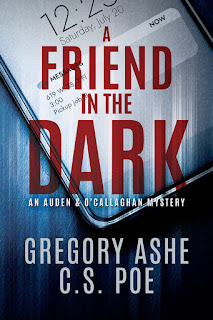 Having just finished this book, I'm stunned.  Well, mostly right now because of the unexpected what the hell cliffhanger at the end, but also because this book grabs you by the throat and drags you into the world of Rufus O'Callaghan and Sam Auden - two damaged, lonely men brought together by the death of their mutual friend, detective Jake Brower.

Sam knew Jake from their time in the military, as well as a complicated relationship of sorts (It was fun, let's not pretend it was anything else).  Jake's death, coupled with blackout drunk emails from Jake hinting at a police cover-up, bring Sam to NYC in order to find the killer, where he quickly meets Rufus, who has the same mission.

The authors dole out small crumbs of information about each man, and I suspect we'll be learning details through every page of the remaining three books in the series.  While it's frustrating in one sense, it is equally heartbreaking.


Alone wasn't new to Sam; he'd always had a part of himself that he kept separate, isolated. The part that wanted more than a one-off. The part that thought about stupid things like the future. But Rufus took alone to a new level. Sam had been with him for almost twenty-four hours now, and he hadn't seen any sign that Rufus had anyone in his life. [...] Who did Rufus hang out with, go to the movies with, shoot the shit with? In a city of almost nine million people, it seemed impossible that the answer was no one.

Rufus, with a long lean frame and flame-red hair, has this "crazy, sexy, nerd vibe" with a mind like a steel trap and a voracious appetite for knowledge, underlaid with unknown tragedy.  Sam is barely described in the book - other than he looks like a "big-ass action figure" - but he has a lot of sensory issues; he can't process noise, being touched, he wears his tee and socks inside out because of the seams, etc.

The plot draws you in as Sam and Rufus slowly unravel the conspiracy, at times a bit too slowly, but it is tightly focused and well-developed. I don't want to say too much because it is so well-done and I don't want to give an spoilers.


Combined with the revelations about their respective pasts, as well as this fragile new relationship between Rufus and Sam, "A Friend in the Dark" is a tantalizing introduction to what looks to be an amazing new series.  5 stars and I highly recommend this book!