The Foreign Affair (The Delingpole Mysteries #3) 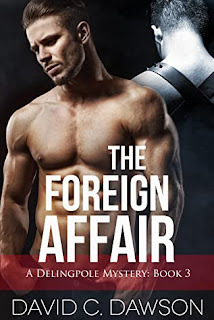 The Foreign Affair is set in Berlin during Folsum Europe (Europe's biggest fetish event, modeled after the Folsum Street Fair in San Francisco).  Dawson does an exceptional job with the setting, giving us the flavor of Berlin's cafes and coffee shops, its architecture and parks, as well as a concert event - "Classic Meets Fetish - in a church with leather-clad classical musicians.

Dominick is visiting his 19-year-old son Matty who is attending the Technische Universitat. Matty's boyfriend, Professor Alex Krovopuskov, is a visiting professor of biomechatronics from Russia. Dominick has his doubts about Alex, mostly because of his age (40), but before he really gets to know him, there is a horrific chemical gas attack on a popular gay bar, and Alex is the prime suspect.

The intrigue begins, with Alex's disapperance, a mysterious death seen only by a homeless immigrant in an industrial park, and strange messages from a dating app.  My chief niggle about the first two books in this series was the plots were overly complex with far too many characters and moving parts, but this book was just right - a tight, well written plot featuring a small cast of well-developed characters and some skillful misdirection.

Add in the start of a new relationship with a very sexy leather-clad German attorney and this is a perfect mix of intrigue and romance.  Very readable and definitely very enjoyable! 5 stars.

I received an ARC from the author in exchange for an honest review.