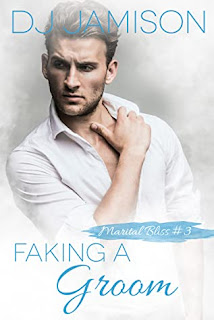 Read book blurb here
Faking a Groom is the third book in the Marital Bliss series, but can be read as a stand-alone.
Personally, I think my rating for this book would be higher if I had NOT read the first book in the series, Surprise Groom, with a very similar plot featuring two boyhood friends entering into a fake relationship in order to best an overbearing father with nefarious plans.
Avery has remained closeted because of his father's political career, and it seems there is always a reason Avery stay in the closet just a bit longer, but when Avery learns his father is sponsoring anti-LGBTQ legislation, he reaches out to Rory to enter into a fake engagement to challenge his father into doing the right thing.
Avery has known Rory since boarding school, where Avery had "gone to great pains to ensure most of their school friends thought they hated one another while sneaking sex [...] on the side."  Avery walked away from Rory to follow the course his father had laid out for his life, even though "he'd loved Rory Fisher when they were both too young to understand what a special, rare thing they had."
Their fake engagement quickly reignites the flames that had never really gone out between the two men and allows Avery to finally come to terms with his femme side. "There. He looked more like himself. He looked .... gay. And not the man's man kind of gay that his father believed him to be, but the real guy inside him. The one who wanted to sparkle."
Where the story didn't work for me personally was the elegiac pace at which each man comes to terms with their relationship.  Things were rehashed .... hashed .... and then rehashed again.  At over 350 pages, this book felt too bloated.  And there's a Huge Unilaterial Decision which is one of my pet peaves where one character makes a major decision that affects the relationship without telling their partner, because "it has to be this way" or "someday he'll thank me for doing this" ...... aarrggh.  Finally, the resolution with Avery's father felt a bit too ... simplistic given the weight and importance it was given throughout the book.
Most reviews of this book have been more forgiving of the items I noted, so I suspect my niggles about the book may be my own, and your results may vary.  3 stars for "Faking a Groom" and I look forward to hearing your comments when you read this book.  Thanks for reading!
I received an ARC from IndiGo Marketing and Design in exchange for an honest review.