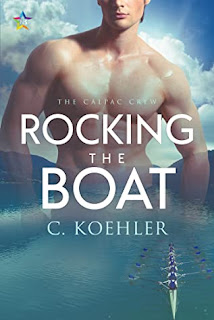 Title: Rocking the Boat (CalPac Crew #1)
Author: C. Koehler
Publisher: NineStar Press
Release Date: September 28, 2020
Genre(s): Contemporary Sports Romance
Page Count: 240
Rating: 3.5 stars out of 5
Read book blurb here
In this contemporary M/M sports romance set in the world of collegiate rowing, the author does a great job of providing readers with an understanding of the sport and the hard work it takes for the coxswain (think "onboard coach") to perfectly synchronize eight rowers in a 60' shell and turn muscle into motion.
Rowers have been called the world's best conditioned athletes and in Rocking the Boat we are introduced to student / rower Morgan and graduate student / Coach Nick Bedford and all the streneous work it takes to perfect their bodies and skills. And once the two men begin a relationship, the author gives us some very sexy, sensual scenes featuring those perfect bodies.  The heat level of this book is nicely toasty!
On the way to their relationship, there is plenty of angst, worry and backtracking, covered in great detail. When Morgan spots Nick at a gay bar with his BFF Drew, Nick panics, saying he is not gay. He sets up Morgan and Drew on a bad date, is unreasonably jealous of Morgan, and vacilates between wanting a relationship with Morgan but worrying about repercussions of a coach dating a student.
There is much made of the difference in their ages (28 vs. 21) but on-page Nick reads less mature most of the time. Or maybe it's that Nick comes across as being very un-self-aware. He takes his anger at Morgan out on the rowing team without realizing his actions. He stresses communication is crucial for everyone on the team, yet he doesn't communicate to his rowers, and fails to communicate with Morgan personally as well.
The book caught my interest at the start with the rowing crew, and the sparks of interest between Morgan and Nick. The middle slows as Nick struggles to finally enter a relationship with Morgan, but in the midst of all this, there is some pretty exciting racing action.  The author really excels in giving us the drama and excitement of rowing.
And if rowing has captured your attention as well, I would strongly suggest watching the excellent PBS American Experience documentary "The Boys of '36" about the University of Washington rowing crew that captured the gold medal against Hitler's elite German rowers. 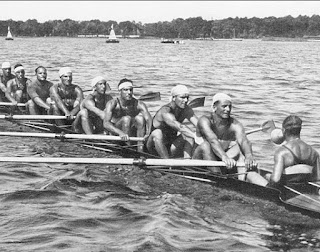 Overall, I'm giving "Rocking the Boat" 3.5 stars because although there were some elements that just didn't work for me, I like the general setting of the series, the amazing rowing and the also pretty amazing sex scenes.   This is the first of four books in the CalPac Crew series and I will look forward to reading more in this series.
I received an ARC from the Publisher, via NetGalley, in exchange for an honest review.