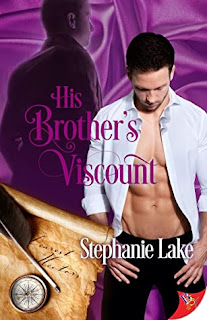 Title: His Brother's Viscount
Author: Stephanie Lake
Publisher: Bold Strokes Books
Release Date: January 12, 2021
Genre(s): Historical Romance
Page Count: 240
Rating: 2.5 stars out of 5
Read book blurb here
This M/M regency begins with a very sexually charged fortnight between Wentworth and Hector, the youngest brother of William, Wentworth's boyhood friend and first lover. Hector is a sweet-natured young man, totally enamored with Wentworth, while Wentworth realizes:
When they were first together, he liked the fact that Hector looked like William. Loved the fact that Hector smelled like William. Adored the fact that Hector tasted like William.
The first third of this book is full of very steamy interactions between the two men and while there is little in the way of character development, Wentworth and Hector have sexual compatability in spades. However, I was not aware until this point in the book that "His Brother's Viscount" is part of a larger series (there is nothing that indicates this in the description or cover) and what follows is fairly incomprehensible because numerous past events are never fully explained.
From what I've gathered, there may have been a kidnapping and rescue, some adventures at sea, lost and found loves, huge family conflicts .... but I'm not entirely sure and most of these events are lightly mentioned in passing.
But beyond this, the plot has a very confusing chronology as it goes back and forth between time periods, between numerous points of view (it seems we get POV from just about every character) as well as dialogue where it isn't always apparent whom is speaking, and on top of this Wentworth is apparently suffering from memory loss due to traumatic events in the past.
However, events that occur completely within the confines of this book are still not crystal clear, such as the nature of the relationship between Hector and Jonathan, who is very quickly designated our villain without more than a line or two of character development.  At times I found myself reading and re-reading passages to try to make sense of what had just happened.
Finally, some language and phrases don't fit into the time period, as well as attitudes unlikely to be the  mindset of someone living in the Regency period. For example, William readily shares that his wife Mary is aware of his past relationship with Wentworth and it doesn't bother her at all.  There is talk of "committed relationships" and fostering of children that seems unlikely for the time period.
Overall, this book just did not work for me for many reasons outlined above. I cannot recommend it and give 2.5 stars to "His Brother's Viscount."
I received an ARC from the Publisher, via NetGalley, in exchange for an honest review.