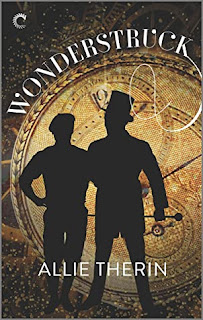 Title: Wonderstruck (Magic in Manhattan #3)
Author: Allie Therin
Publisher: Carina Press
Release Date: February 9, 2021
Genre(s): Paranormal Romance
Page Count: 255
Rating: 3.5 stars out of 5
Read book blurb here
"Wonderstruck" is the third and final book in Allie Therin's Magic in Manhattan series, set in an alternate universe /1920's New York where magic exists, and paranormals with various powers are working to save the world from powerful supernatural relics in the hands of dangerous magical malcontents.
Arthur McKenzie, Rory, Zhang, Jade and former adversaries Gwen  and Ellis have banded together to acquire and neutralize the last relic. This adventure takes them to Paris where the relic will be offered for sale at a secret paranormal ehxibit at the Paris World's Fair.
Much of the plot involves their efforts to get to Paris and find the seller of the relic. Rory and Arthur are happy together, yet Rory's almost pathological need to not rely on Arthur is a bit wearing.  As Arthur says

... you'll choose the suffering you think you've earned over the help you don't think you deserve, and Teddy, I don't know how to handle this heartbreak.

But even as Rory finally agrees to allow Arthur to help fight his battles, petty jealousy from both parties continues.  And Arthur holds an essential secret close to the vest, unwilling to tell Rory (at this point, I'm yelling at my Kindle, use your words, for gawd's sake talk to one another!). The book continues to be fairly non-explicit, but thankfully by the end of the series, their relationship feels settled and very secure.
As in the prior books, the middle of the story slows a bit and relies more than once on the sudden introduction of a mysterious character, but the author pulls it all together and gives us a very suspenseful thriller of an ending that is very satisfying.
Therin excels in creating an interesting alternate universe and peopling it with well-developed main characters, as well as concluding each book with a well-written exciting conclusion.  I remain exasperated at the slowness of the plot at times and the continuing petty conflicts in Ace and Rory's relationship, but overall Magic in Manhattan is an engaging series.  3.5 stars for "Wonderstruck" and a solid 4 stars for the entire series.
I received an ARC from the Publisher, via NetGalley, in exchange for an honest review.