The Pursued and the Pursuing 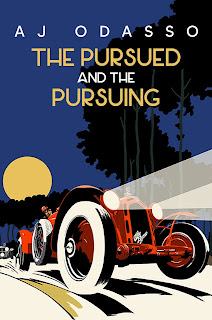 Title: The Pursued and the Pursuing
Author: AJ Odasso
Publisher: DartFrog Books / DartFrog Blue
Release Date: September 28, 2021
Genre(s): M/M Historical, Alternate Universe /  Reimagining
Page Count: 170
Rating: 3 stars out of 5
Read book blurb here
This is a reimagining of F. Scott Fitzgerald's The Great Gatsby in which Jay does not die as a result of a gunshot, but rather lives and enters a life-long passionate relationship with Nick Carraway, the narrator of the book (and Daisy's cousin). And later along, Tom and Daisy's daughter Pam becomes a surrogate daughter to the two men.
Now, if you are like me and reluctantly read this classic in high school, you may have the same problem as I did. I didn't recall every last detail and so when Odasso briefly mentions a particular scene or two .... it was hard to get up to speed on what exactly happened in that scene and what they were drawing from that scene. For example, "the ceremony {...} reminded me of nothing so much as the ill-fated day on which we'd all piled into Tom's coupe and Jay's Kissel and had let our irritable mutual hatred do the rest." Okay, sure. Also, there is little character development beyond the original, again perhaps assuming that we had a strong memory and understanding of the original.
At times, I felt like I was reading (and not always getting) the jokes in the New Yorker magazine. For example, Nick shares a humorous postcard Pam creates to capture New Orleans: It featured a parade of cartoonish alligators in Mardi Gras beads. On the reverse, Pam had scrawled: TO MESSRS. BOSWELL & JOHNSON WITH REGARDS, CAN'T SPELL OR FIT THE REST. WISH YOU WERE HERE. [...] She might make a fine humorist if she put her mind to cultivating the impluse at greater length. Uumm, okay. Can anyone else just see a vintage New Yorker cartoon? And if so, can you explain it to me? 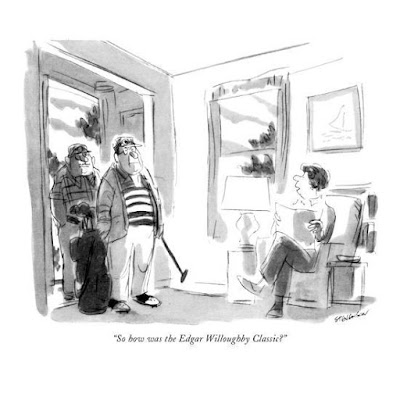 At the end of the book, thinking back upon Jay and Nick's life together, it feels languid and half-realized. In much the same way the Great Gatsby gives us a world of illusion and facade, Jay and Nick's life together reads the same, IMHO. Fantastic parties where coworkers dance on tables and sneak off to the library for amorous trysts, epic love-soaked long train trips together, Venice, Paris, a charming house on Beacon Hill, a hazy summer exploring New Orleans ("an entire port-of-call filled with untainted memories for us to share."), and so on.
While this particular alternate history did not work for me, it has pushed me toward rereading The Great Gatsby. 3 stars (and I may revisit this review after reading the original classic).
I received an ARC from the Publisher, via NetGalley, in exchange for an honest review.