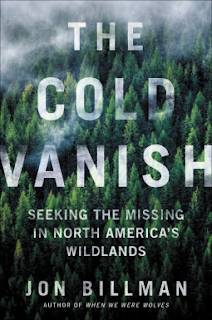 Jon Billman has written an exceptional book about people who simply vanish in the wild, often without a trace (a "cold vanish"), from around the world, from Olympic National Park in Washington state to Israel. Pauline Boss, researcher and family therapist claims that "a family member missing to the unknown is the hardest thing a human being ever has to face" - she has coined the term "frozen grief." I just cannot imagine the sheer terror of never knowing what happened, or wondering if the missing person is off living their life somewhere else in TROTW (the rest of the world).

Billman introduces us to Randy Gray as he searches for his son Jacob who simply disappeared near the Sol Duc River in the Olympic National Park, leaving his bike behind. Bilman befriends Randy and travels with him as Randy searches for his son, and along the way Billman shares other stories of the missing including Amy Bechtel, who disappeared while running through the Shoshone National Forest in Wyoming. Dale Stehling missing from Colorado's Petroglyph Point Trail about 1 mile away from the gift shop, 19-year-old Joe Keller who took a run one afternoon and never returned to his aunt's dude ranch in the San Juan Mountains in SW Colorado, as well as cold vanishs in Michigan's Upper Peninsula. Billman gives us the strange story of Ollie McAfee from Northern Ireland who disappeared in Israel, perhaps suffering from the Jerusalem Syndrome, as well as that of Robert Bogucki who set out to cross Australia's Great Sandy Desert. only to emerge 43 days later after an epic spiritual quest as well as near-starvation.

I loved Billman's writing style which is sparse and lean, yet touches on the emotions of the moment as well as the perserverance of the people who search for the lost. You also learn that many large parks do not have SAR (search and rescue) protocols and it's pretty much hit-or-miss depending on where you're lost as to the level of aid you'd receive from various local, state and national agencies. And you'll also learn there is no national database of the missing from national parks.

I found this book deeply moving as Randy continues searching for his son, but as time goes on the search becomes more spiritual "When the clues are not literal, rather cerebral or ethereal, what remains is the spiritual." Even if you think you aren't interested in SAR and missing persons, this book will captivate you. 5 stars.

I received an ARC from the publisher, via NetGalley, in exchange for an honest review.