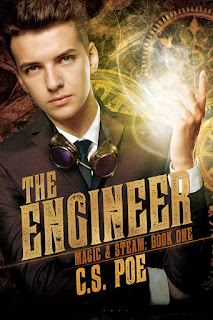 
C.S. Poe has a new novella coming out soon, the first in a new series set in an alternate universe of the Old West, with a mix of steampunk and magic.  I've just dipped my toes into the story and I'm already enthralled ....


1881—Special Agent Gillian Hamilton is a magic caster with the Federal Bureau of Magic and Steam. He’s sent to Shallow Grave, Arizona, to arrest a madman engineer known as Tinkerer, who’s responsible for blowing up half of Baltimore. Gillian has handled some of the worst criminals in the Bureau’s history, so this assignment shouldn’t be a problem. But even he’s taken aback by a run-in with the country’s most infamous outlaw, Gunner the Deadly.

Gunner is also stalking Shallow Grave in search of Tinkerer, who will stop at nothing to take control of the town’s silver mines. Neither Gillian nor Gunner are willing to let Tinkerer hurt more innocent people, so they agree to a very temporary partnership.

If facing illegal magic, Gatling gun contraptions, and a wild engineer in America’s frontier wasn’t enough trouble for a city boy, Gillian must also come to terms with the reality that he’s rather fond of his partner. But even if they live through this adventure, Gillian fears there’s no chance for love between a special agent and outlaw.

Based on the short story, "Gunner the Deadly." Entirely revised, newly expanded, and Book One in the exciting new steampunk series, Magic & Steam.