The Hideaway Inn (Seasons of Hope #1) 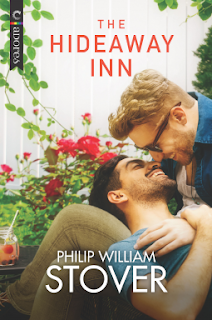 "Skinny Vinny" was a quiet kid in school, just trying to graduate without incurring the wrath of homophobic bullies. The summer before graduation he became friends with popular Tack O'Leary - as Tack says "We fit like opposite pieces of a puzzle that click when joined" and from Vinny: "The only time I felt normal was when I was with him that summer."  But after Tack ghosted him senior year, Vinny couldn't wait to get out of town, and on his way to a college degree and a powerful job, Vince "erased any aspect of [his] personality that [he] though was a weakness."

Vince returns to New Hope in a last grasp attempt to save himself from financial ruin. He's purchased the Hideaway Inn with plans to quickly rehab it, sell it to the FunTyme hospitality chain and get out of town with enough money to start again. Along the way he reconnects with Tack, who is in culinary school, and reluctantly hires Tack as his chef.

Bottom line - Vince is an arrogant jerk.  "Every breath I take is a controlled study in hyper-masculinity, from my voice to how I hold my body to my lack of overly expressive emotion."  We  get Vince's POV throughout, but he is a difficult character to like, much less cheer for his HEA. and I really struggled with his cold demeanor and continual putdowns of Tack in order to build up his own low-esteem.

Tack, on the other hand, is a stand-up guy who has embraced his bisexuality, gets along with his ex-wife and is joyfully co-parenting a great six-year-old named Jules who loves tutus and dump trucks equally and likes the pronouns "them" and "they."  Tack is a great character who deserves a happy life ...  just not with Vince.  However, the author does a beautiful job of crafting Tack and developing his character and I loved Jules and the community that Stover gives us in New Hope.

I really loved Stover's first book Evolution of Love -- which apparently has been republished as There Galapagos My Heart -- and I am looking forward to reading more about the nurturing Bucks County community  and hope we'll get glimpses of Tack and Vince that show their relationship growing and evolving. 3.5 stars for "The Hideaway Inn."